From Marley & Me to 101 Dalmatians, some of the greatest and most memorable movies of all time star cute and courageous canines as their leading roles. But who is the world’s favourite dog in movie history? And which dog was the most profitable of all?

To find out, we took the top 50 movies by global box office takings for every year from 1989 to 2019 and manually filtered them to include just the movies that starred dogs as major characters.

We then gathered information about each dog (its name, gender, breed, etc) alongside information about the films themselves. From there, for each movie we created an overall score based on the film’s average audience rating and gross profit.

This then revealed that…

Hollywood's Top Dog is... Dug from Up!

The 2009 animated film, Up, pulled on the heart-strings of many, just as the balloons tied to Carl’s house pulled it up into the sky. But little did Carl know, on his adventure to the South American Wilderness, he and Wilderness Explorer, Russel, would meet the loveable dog, Dug.

Dug is not just any dog, he has a special collar which allows him to talk, and is always kind, helpful and eager to please. With quotes such as “Hi There! My name is Dug. I have just met you, and I love you” and the adorable, “I was hiding under your porch because I love you”, it’s easy to see why he made it to number 1 in the ranks for Hollywood’s Top Dog.

As you can see from the table, Dug scored an impressive 18 out of 20 on the People’s rating. This, combined with the film’s $677,250,109 gross profit (adjusted for inflation), puts Dug miles ahead of all the other famous movie star pooches from the last 30 years. 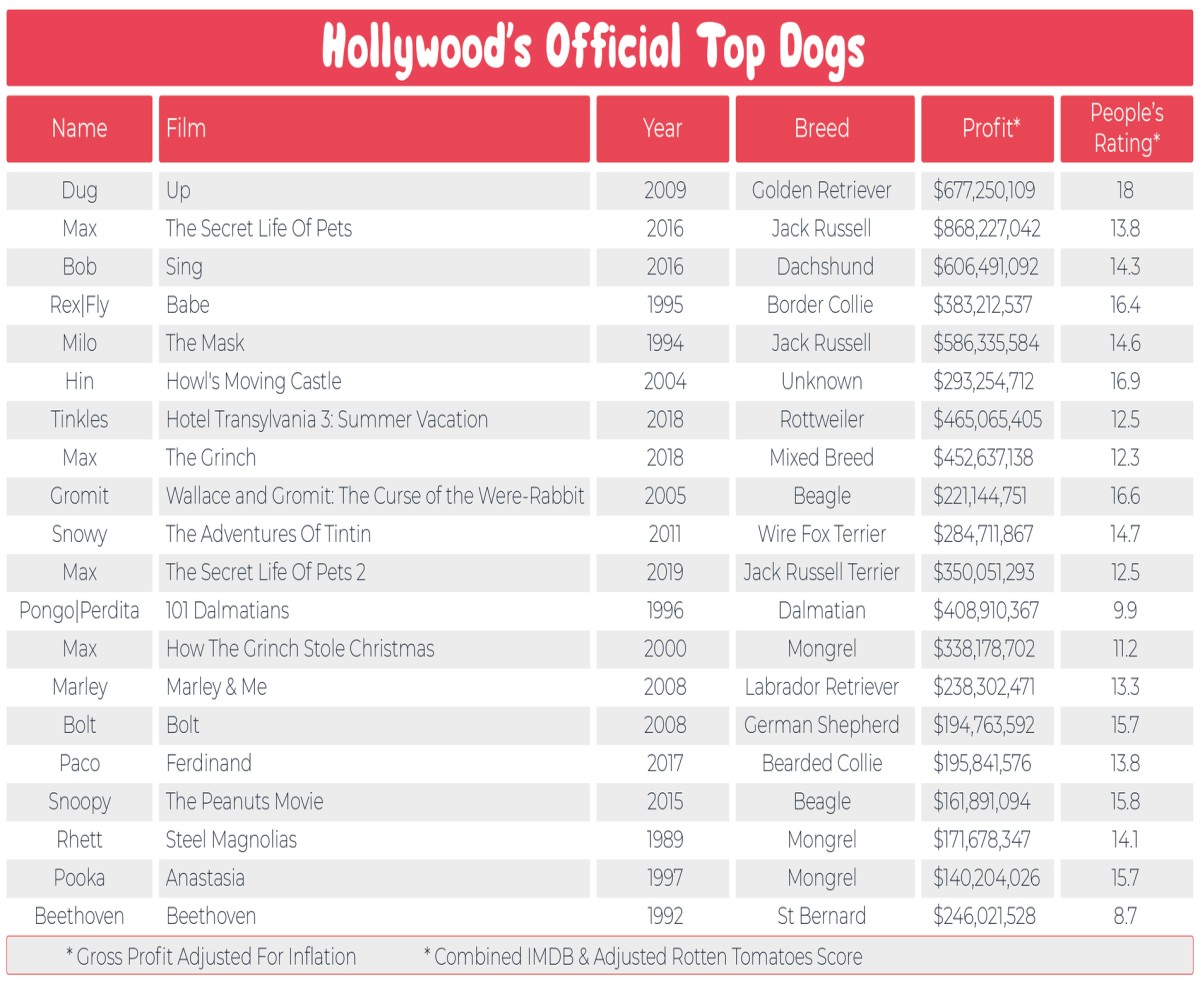 Second place was awarded to Max and co from The Secret Life of Pets, with Bob from Sing and Fly and Rex from Babe following in third and fourth place.

The People’s Favourite Dog From the Movies

As well as being Hollywood’s Top Dog, our study also revealed that Dug from Up is the world’s favourite canine movie star!

To figure out which was the most-loved movie dog, we collated IMDB and Rotten Tomatoes ratings of each film in our database. To get a score out of 20, we divided the Rotten Tomatoes scores by 10, (as they’re rated out of 100) and added together the IMDB score and adjusted Rotten Tomato score for each film. This then allowed us to create the People’s Choice leaderboard showing the world’s favourite movie dogs.

101 Dalmatians' Pongo and Perdita came in second place in the People’s Choice category, closely followed by Hin from Howl’s Moving Castle and the lovable Gromit from the classic Wallace and Gromit: The Curse of the Were-Rabbit.

The Most Profitable Hollywood Dog

As you can see from the table below, Max and Co from The Secret Life Of Pets holds number one spot for the most profitable Dog in Hollywood. The loving and charming jack russell Max first hit our screens in 2016 when the film was first released, and grossed an impressive total of just over $800 million in profit. Now, taking inflation into account, this would equate to a whopping $868,227,042! 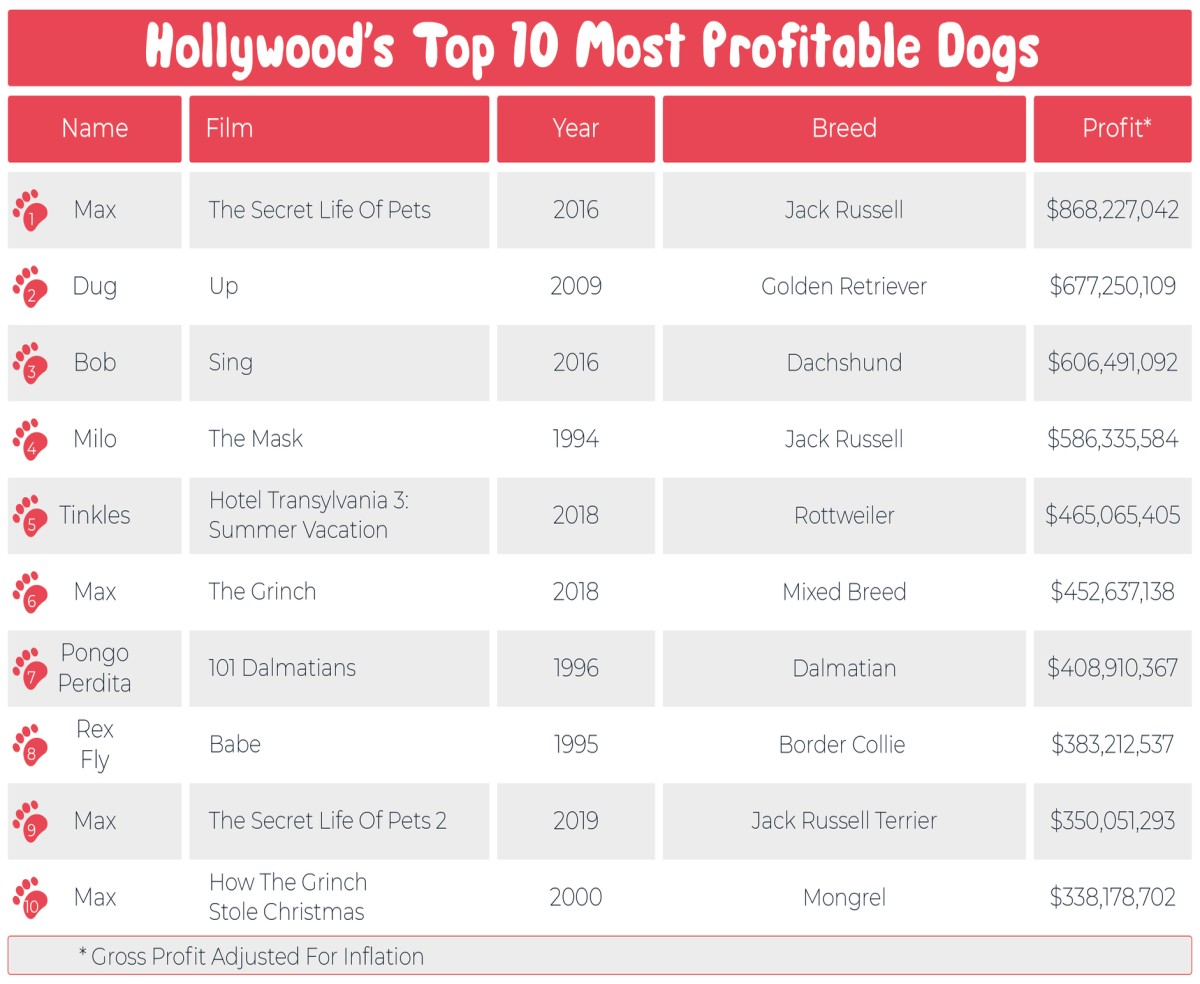 The second most profitable Hollywood dog was the lovable golden retriever Dug from Up, followed by Bob from Sing and Milo from the Mask. The pooch who found himself in last place with his tail between his legs was Flealick from Babe: Pig in the City. This movie, released in 1998, made a total loss of over $17 million - meaning that poor Flealick has to be named the least profitable dog in Hollywood!

To gather the data, we took the top 50 movies by global box office takings for every year from 1989 to 2019 and manually filtered them to only include movies with dogs in. We then assessed whether the dog characters were major or minor characters (based on a team consensus and a little online research - not particularly scientific, we grant you). Then pulled information about the dogs in the movie (names, character gender and breeds).

From there, for each movie, we looked at:

We used global box offices takings minus production costs to give a crude gross profit figure and used this to determine Hollywood's Most Profitable dog.

We also pulled, for each movie:

In one notable case (that of 'Homeward Bound: The Incredible Journey') we were unable to source an estimated production cost. As such, we used the lowest figure of the other movies in the list released the same year ($15,000,000) but this could be inaccurate.

To name Hollywood's Top Dog, we based our figures on a key assumption: People's views are just as important as box office takings. Therefore, profit and people's score each accounted for 50% of the overall score.

We then took our shortlist of 45 films and ordered them from highest to lowest profit. We needed a score out of 20, so we scored the most profitable film 20.

Thank you for joining, member discounts are now available.

This site uses cookies to provide you with a better user experience. By using Snaptrip you accept our use of cookies.

Your browser is out of date and we can't guarantee a consistent experience when using our site. Please consider updating or switching. More info